The English of the Appalachian Area 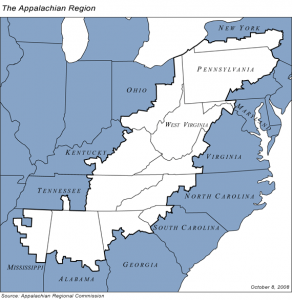 While all of the text in Susannah is in English, it may sound different than the English you speak. Susannah is written in a verismo style, meaning that the characters, language, and plot are rooted in reality as much as possible – everything in the opera must be believable. Operas in this style often employ colloquial language, and Susannah is no exception. To create a believable opera set in America’s Deep South, Carlisle Floyd chose words and a dialect that are uniquely Appalachian. Here are some of the more noticeable characteristics of this dialect.

The “s” sound that ends some words may be replaced with an “n” sound: one might say “her’n” instead of “hers.”

Participles and gerunds ending “-ing” are pronounced as though they ended “-in,”
as in huntin’ or preachin’.

The letter “a” is often added as a prefix to verbs; such as  a-bathin’, aspyin’, or a-prayin’.

As with any dialect, some words have a colloquial usage. Examples in Susannah include:

Afore – before
Allers – always
Brickbat – a piece of brick; also an insult
Chitlins – fried pig intestines
Crick – creek
Jaybird – a blue jay; also someone who talks too much
Jest – just
Out’n – out of
Mighty – very
Mite – small amount
Plum – completely, absolutely
Reckon – to suppose
Seed – saw
Spell – length of time
Sum’mers – somewhere
They’s – there is or they are
Twarn’t – it wasn’t
Varmint – vermin

Floyd’s mastery of this dialect is playfully displayed in the silly “Jaybird” song in Act 1 of the opera, into which he sneaks some clever wordplay:

“Oh, jaybird sittin’ on a hick’ry limb,
He winked at me an’ I winked at him.
I picked up a brickbat
An’ hit him on the chin.
‘Looka here, little boy, don’t you do that agin!’”

Taken literally, it could describe an easily imagined and somewhat comic scene; a blue jay sitting on a branch catches a youth’s attention, and the youth throws a rock at it. Startled, the bird squawks angrily at the boy. Read a bit differently, knowing that in the Appalachian dialect a “jaybird” is someone who talks too much, and a “brickbat” is an insult, it describes an interaction between a youth and a person who is heckling him.