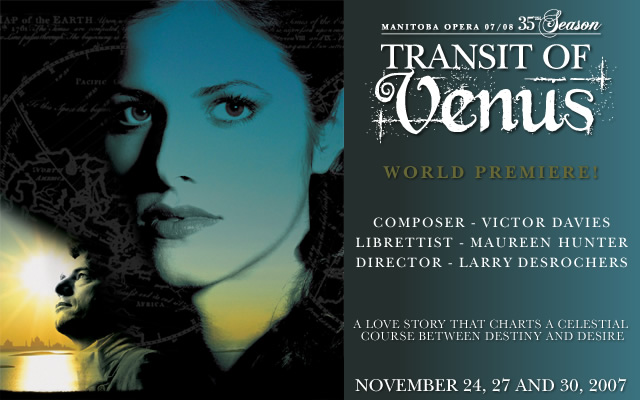 Transit of Venus is based on the real-life expeditions of the 18th-century French astronomer, Guillaume le Gentil de la Galaisière, who twice tried, unsuccessfully, to chart the transit of the planet Venus across the sun. As early as the 17th century, the transit was believed to be a way of determining accurately the distance between the earth and the sun.

The opera explores the question of achieving your potential or being with the people you love. It follows the play’s storyline and tells of Le Gentil’s passion for what he believes is his destiny (astronomy) and Celeste’s unconsummated love for him. He and Celeste are engaged, but  his quest to chart the transit of Venus takes him far from home, first for six years and then for another five years. Believing Le Gentil to be dead, Celeste turns to his assistant, Demarais for comfort and ultimately the love she so longs for. When Le Gentil finally returns, he tries to explain that he realizes his destiny to be with her, but she has moved on with her life. In the end, Le Gentil has failed in both tracking his heavenly love (Venus) and his love here on Earth.