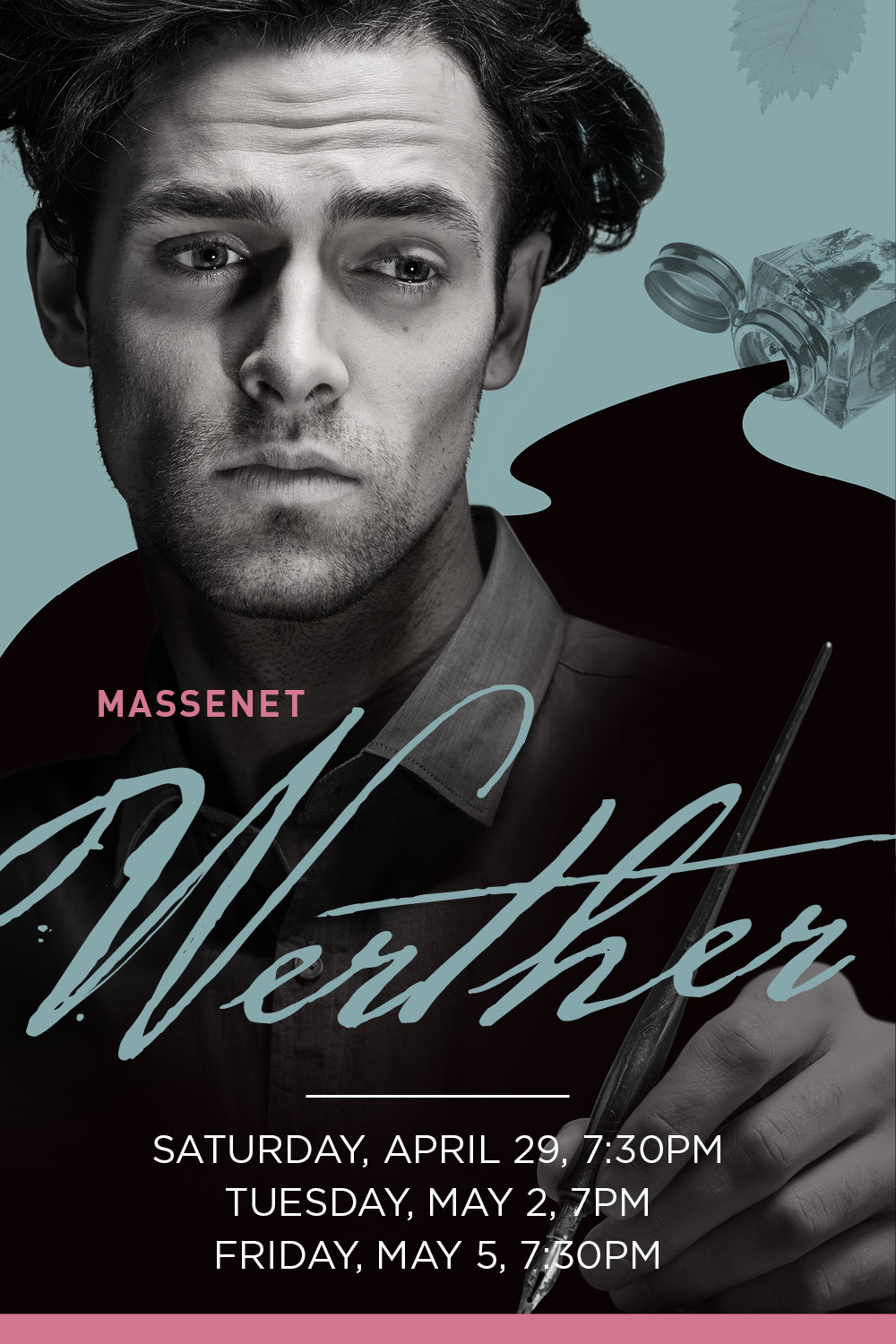 Based on the great German Romantic poet, Goethe’s, semi-autobiographical novel, The Sorrows of Young Werther.

The young poet, Werther, falls instantly in love with the beautiful and unattainable Charlotte; however, Charlotte has promised to marry another. Werther tries to stay away, but his tormented heart aches to be with her. Seeking peace the only way he knows how, he takes his own life as Charlotte finally returns his love.

Irresistible melody infused with vivid and lush orchestration results in a masterpiece that is among the most exquisite and moving in all of French opera.

Act I
A midsummer’s day outside the home of the Bailiff.
It’s only July, but the Bailiff, a widower, is teaching his six youngest children a carol they’ll be performing at Christmas. A pair of neighbours, Schmidt and Johann, watch and gossip about that night’s village ball. The Bailiff says his oldest daughter, Charlotte, whose fiance is out of town, will be attending the ball with a visiting poet named Werther.

As the sun sets, Werther arrives. Watching her care for her siblings, he is smitten by  the beautiful Charlotte. They leave for the ball, and shortly thereafter Charlotte’s  fiance, Albert, returns unexpectedly from his trip. He tells her sister Sophie that he will  surprise Charlotte in the morning. Charlotte and Werther arrive home from the ball in the moonlight and, inspired by the romantic mood, Werther declares his love to her.  When the Bailiff calls out from the house that Albert has returned and Charlotte  explains he is her fiance, Werther’s hope is shattered. He insists she keep her vow, yet  he cannot imagine she will marry someone else.

Act II
One Sunday, the following September.
Charlotte and Albert, married for three months, are walking to church, where the pastor’s golden wedding anniversary is being celebrated. Werther, who has tried to
maintain a friendship with them both but still feels tormented, appears. After the service, Albert tells Werther that he understands how he must feel, having met Charlotte when she was still free, and that he sympathizes with him. Werther replies that he feels only friendship for Charlotte. Sophie invites him to dance but he refuses. Finally Charlotte emerges from the chapel and tries to engage Werther in polite conversation, but he keeps talking about their first meeting and his love for her. In an attempt to soften his pain, she suggests he leave town, then relents, asking him to come visit for Christmas. Left alone, Werther for the first time contemplates the idea of suicide. When Sophie appears, he tells her he is leaving town and rushes off. Sophie bursts into tears, and tells Charlotte that Werther was acting like a crazy man. Albert, looking on, knows better: Werther is still in love with his wife.

Act III
Christmas Eve, Charlotte and Albert’s home.
Charlotte is home alone, sadly re‐reading Werther’s letters. Sophie unsuccessfully tries to cheer her up, then heads off to spend the holiday with their father and
siblings. Suddenly Werther appears, distraught and bitter. Charlotte seeks to distract him with a favourite book of classical poetry, but Werther chooses a particularly morbid verse, reading aloud. He presses Charlotte to declare her love for him. She momentarily loses her composure and falls into his arms, but then
recovers and runs from the room, saying they will never meet again. Werther declares that Charlotte’s refusal has condemned him to death and leaves. Albert, returning home, immediately discerns that Charlotte has had a visitor but she denies it. A messenger arrives, bearing a note from Werther: he is leaving on a long trip and wants to borrow Albert’s pistols. Albert forces his wife to hand the guns to the messenger. She understands his intentions only too well and, the moment Albert leaves the room, rushes out, praying to reach Werther in time.

Act IV
Werther’s lodgings.
Charlotte finds Werther mortally wounded. Barely able to register her presence, he declares his love once more, insisting he is happy to die in her arms. Charlotte  admits she has loved him from the day they met, though she was bound by her vow to Albert. As Werther dies, the children are heard singing their Christmas hymn.