A Walk for the Arts

A WWII veteran, Dr. MacEwan concluded his walk on November 11, also his 96th birthday, and raised over $124,000!
Donations in his honour included $100,000 contributed by an anonymous sponsor and many donations from the community.

“I am very happy to have reached my goal and to have inspired others to donate to the campaign,” said Dr. MacEwan. “And to have been joined on my daily walks by so many artists and other hard-working members of our artistic community was such a treat!”

If you were inspired by his journey, you can still support Dr. MacEwan’s walk until the end of November.

Dr. MacEwan cares deeply about the arts. When the pandemic hit and stages went black across the city, he knew he wanted to do something to help to ensure those footlights would once again shine and performers would be back on stage. He wants future generations, including his eight grandchildren and two great-grandchildren, to grow up in a city with a thriving performing arts community.

An anonymous sponsor is donating $500 for every kilometre Dr. MacEwan walks, plus an additional $500 for each day he finds someone to walk with. So far, he has had a walking partner every day. Dr. MacEwan makes sure to take a selfie with everyone he walks with, and his daughter is assembling a book to commemorate the project.

By the time Dr. MacEwan finishes his challenge on November 11, his 96th birthday, he will have raised a total of $96,000 for the performing arts in Winnipeg. As an extra incentive, if Dr. MacEwan completes the challenge, the sponsor has offered to round up the donation to $100,000, with $25,000 going to each of the four arts organizations.

We are collecting additional pledges and donations in support of Dr. MacEwan and will distribute all funds raised evenly between the four arts organizations when the challenge is completed.

About the Arts Organizations

Manitoba Opera is dedicated to changing lives through the glory of opera. The company uses the art form to build stronger communities, to tell stories that matter to Manitobans, and to contribute to the education of youth across the province. Established in 1969, Manitoba Opera is the only full-time professional opera company between Toronto and Calgary and serves a region that also includes northwestern Ontario, Saskatchewan, and the Dakotas. Manitoba Opera has embraced all aspects of its mandate throughout its history, producing a range of repertoire as well as producing new Canadian works.

The Royal Manitoba Theatre Centre exists to celebrate the widest spectrum of theatre art. Deeply rooted in the province of Manitoba, which gave it life and provides for its growth, Royal MTC aspires to both reflect and inform the community it serves.

Founded in 1939, the Royal Winnipeg Ballet holds the double distinction of being Canada’s premier ballet company and one of the oldest ballet companies in North America. Under the artistic direction of André Lewis, versatility, technical excellence and a captivating style are the trademarks of the Royal Winnipeg Ballet, qualities that have garnered both critical and audience acclaim. RWB’s superlative standards keep the Company in demand across North America. In addition to the Company, the RWB is home to the RWB School, consisting of both a professional division which trains young artists for a professional career in dance, and a recreational division which provides classes to over 1,500 students each week.

The Winnipeg Symphony Orchestra is an orchestra tucked into the geographic centre of North America. Since its debut performance in 1948 the WSO has become a powerhouse orchestra, regularly surprising guest conductors and artists with the exceptional musicianship and flexibility of its members. The WSO is integral to Winnipeg’s rich cultural life, delighting more than 225,000 audience members each year with innovative programming and musical excellence. The WSO also presents educational programs for more than 40,000 students annually and has toured across Canada, twice to New York’s Carnegie Hall, and regularly across Manitoba. 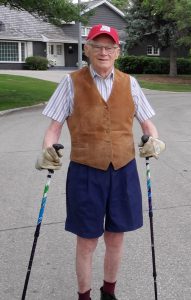 To pledge to Dr. MacEwan per kilometre, contact Liz Miller.